Electrolytes are ions, either positively or negatively charged. We use this opposite nature to create a powerful electrolyte concentrate, to keep you the competitive athlete hydrated longer and recover from exercise quicker than the competition in real time. Real time meaning the finish line during game time! The 8oz concentrate is to be mixed with water or your favorite drink. ​Order now, right now, right now! Before the competition!

Having an extensive athletic background from playing basketball at a small college and professionally in Germany, as well as being an NASM certified personal trainer, I’ve tried just about everything to try to enhance athletic performance.  Several months ago I was introduced to DocScott’s Electrolytes and have since been using it myself in training for a half-marathon.  The first time I used it I was able to feel a significant difference, particularly in my body’s ability to recover!  Drinking DocScott's Electrolytes I was able to shave 60 seconds off my time! I would recommend DocScott’s Electrolyte to the serious athlete, as well as the upper-tier weekend warrior that runs in / trains for marathons and triathlons.   Doc Scott’s drink is absolutely something I would have used as a player in college and in Europe! Hydration is the KEY to optimal performance and recovery. There is nothing else out there that is as effective in re-hydrating the serious athlete as DocScott’s Electrolytes.

Request an email copy of my BIA results. You'll be amazed as I was.

Everybody requires an electrolyte balance between the intracellular and extracellular spaces in our bodies (intracellular is within the muscle cell, extracellular is outside the cell.) Maintaining precise osmotic gradients of electrolytes are important to winning during competition. Mr/Ms. Athlete, read that prior statement again. Such gradients or concentrations inside vs outside the cell affect and regulate the hydration of the body, and are critical for nerve and muscle function. Without sufficient levels of key electrolytes or trace minerals, muscle weakness or severe muscle contractions (cramping) may occur. Electrolytes prevent weakness and cramping. Electrolyte balance is maintained by drinking electrolyte-containing substances, like DocScotts Electrolytes. Electrolyte imbalance, such as dehydration during exercise, or heat exhaustion, may be one of the reasons for poor athletic performance. i.e. you lost. So, where are you at the finish line? Did you win? If it's all about winning you should try DocScotts Electrolytes. Order today.

DocScott's Electrolyte Concentrate is a phenomenal product. I purchased it initially to help with restless legs at night and found it not only cured my insomnia but it also gave me extra energy during my workouts and when I played volleyball. This is a fantastic product for athletes and is a wonderful substitute to pure potassium tablets which can be hard on the stomach or super market drinks with electrolytes that contain added sugar. It's also extremely affordable considering the many benefits achieved by using a small amount every day. Highly recommended!
Congrats on your expansion!
Cheers,
Jolie Connor

Dietary minerals (aka trace mineral nutrients) are the chemical elements required by living organisms like humans and animals. ​Important "trace" minerals, necessary for competitive athletes and the rest of us, include iron, cobalt, copper, zinc, molybdenum, iodine, selenium and others. Over twenty dietary minerals or electrolytes, i.e. DocScott'sElectrolytes are necessary for the optimum functioning human or competitive weekend/professional athlete. The total number of minerals that are absolutely needed is not known. Ultratrace amounts of some minerals, for example boron, chromium, etc., are known to clearly have a role but the exact biochemical nature is unknown. Others trace minerals such as zinc, silicon, selenium are suspected to have a role in health, but without absolute proof. One mineral, for example cobalt, is available for use by humans only after having been processed into the complicated molecule known as vitamin B12 by bacteria in your gut. ​
DocScott's Electrolytes provides the following trace minerals utilized as electrolytes from alkalized mineral salts to give the competitive edge the athlete needs:
Magnesium, Phosphorus, Chloride, Sodium, Potassium, Calcium, Chromium, Manganese, Iron, Cobalt, Copper, Zinc, Selenium, Molybdenum,  (and other naturally occurring trace elements found in crystalline salt.)​ 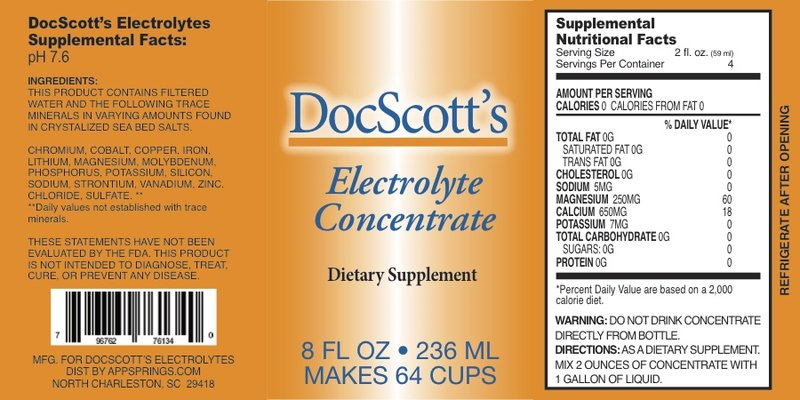 These statements have not been evaluated by the Food and Drug Administration. This product is not intended to diagnose, treat, cure or prevent any disease.
Copyright © 2023 DocScotts Electrolytes - Powered by Online Store